Our stand will be devoted to the work of Arshile Gorky and Cy Twombly. *

Both artists used free-form patches of color combined with animated linear drawing, but the rapport that unites them across a span of a generation transcends their formal similarities.  Their works share by preforming indecipherable narrative dramas – Twombly most visibly with his incorporation of fragments of words, texts, and graphisms, Gorky with his biomorphic figures and anecdotally, his predilection for storytelling while drawing [Spender].  Erasures and overwriting/overdrawing are common, transformations of representational elements, all within an active field or atmosphere of tension.  The lyric and the violent coexist along with the lush and astringent – Eros and Thanatos – Et in Arcadia ego.

Both artists looked inward towards the inchoate realms of the interior body, representing pseudo-organs, carnal appetites, and bodily functions.  They also looked outward, to nature, to the pastoral, to the lost utopian past, to paradise.  The importance of place, particularly the countryside, was central to the variety and volume of their production.  Gorky at Saul Schary’s Farm in Milford, CT, Crooked Run Farm in Lincoln, VA, and Sherman, CT – Twombly at Lexington, VA, and in Italy, Sperlonga, Bassano, Bolsena, and Gaeta.  Matthew Spender has described Gorky’s “looking into the grass,” “his returning to the earth,” and his “research into nature’s forms” [Sweeney], as part of “a genuinely American feeling toward nature” and has suggested a link to the American Transcendentalists, particularly Thoreau and Emerson.  And of course, for Twombly there is the Classical culture of Virgil’s Eclogues and Ovid’s Metamorphoses.  [It can also be playfully noted that both men were transplants (foreigners) – an Armenian American and an American Italian – both ironically criticized for being “too European.”]

There are expected differences to be acknowledged as well – Twombly’s direct use of written language and signage and his greater emphasis on the work’s materiality and process.  He has a certain “gaucheness” [Barthes], destroying the connection between eye and hand, separating the work from vision, making it seem thrown away, dirty, like trash, like graffiti, impersonal.  Gorky by comparison is less subversive, he is relatively tactful and elegant.  But perhaps most conspicuous is Twombly’s detachment, his ambiguous sense of irony that counters Gorky’s almost ever present sincerity.

While scholars have occasionally drawn formal comparisons between the two artists [Anfam, Lee], there has yet to be an exhibition (gallery, museum, or otherwise) showing their work together.  [Somewhat surprisingly, Robert Storr in his essay on Gorky’s artistic legacy for the 2010 Gorky retrospective makes no mention of Twombly.]

We hope with our modest stand to begin to explore these connections and to perhaps reveal an alternative route bridging (through and around) Abstract Expressionism – instead of seeing, as is common, Gorky as the proto Abstract Expressionist and Twombly the post.  To bring them closer together and to lessen their individual dialogues with Pollock, as is typically emphasized.  [It should also be noted that it is de Kooning who is closer to the two in spirit and practice.]

One such path can be made by realizing that Roland Barthes’s extraordinary essay on Twombly, “Non Multa Sed Multum” [1976] applies remarkably well to Gorky, just to a lesser degree, without Twombly’s explicit use of written language(s) (verbal and numerical).  It is Barthes’s emphasis on language in the broad sense (representation, abstraction, sign, etc., as language) and most importantly, his notion of displacement that fundamentally connects the two artists.  Gorky plays, he shifts, slides, and falls between the languages of representation, biomorphic symbolism, and an almost untethered abstraction, having learned and worked through the idioms of his beloved masters, Cézanne, Léger, Picasso, Kandinsky, and Miró.  While Barthes’s reading of course also applies to the iconoclastic Pollock, it is less evident, Pollock’s displacement of language almost being replaced by his negation/rejection of representational/conventional communication.  Gorky and Twombly rather traverse the aesthetic given, the stereotype, and make apparent the displacement of the gesture – they perform Barthes’s “task of dealing with our language” more openly.

* Twombly saw the 1951 Arshile Gorky Memorial Exhibition at the Whitney Museum of American Art and decades later dedicated a series of drawings to Gorky [Twombly, Untitled (Stones are our Food to Gorky), 1982-84]. 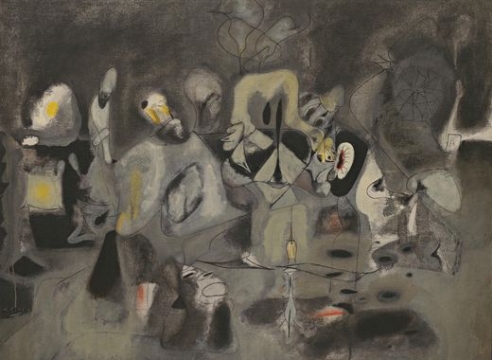 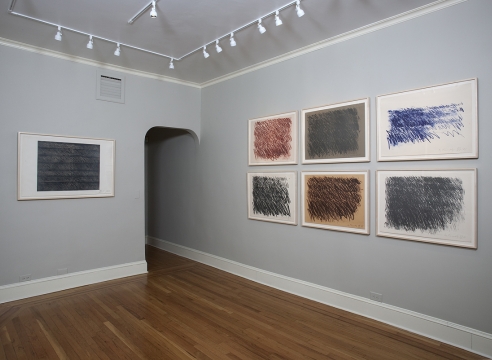