NEW YORK – Jeff Koons’s Jim Beam – J.B. Turner Engine and six individual train cars, executed in 1986, are a gleaming celebration of the pioneering American spirit. The vintage “John B. Turner” steam engine carries the hope, heroism, and zeal of its namesake, then president of the Galena and Chicago Union Railroad Company. The silvery stainless steel surface of Koons’s version suggests glamour and wealth, but it also refers to the mainstay of American industrialism – the steel used to forge the railroads of the Western frontier. At the same time, Koons’s train is a critique of the exploitation inherent in this expansionism and of the socio-economic distinctions that industrialization amplifies.

Desire for social mobility is both a source and a product of progress. A commentary on the American dream of work, wealth, and luxury, Koons’s seductive train tempts our avarice; indeed, each carriage is filled with a fifth of Jim Beam bourbon and sealed with a tax stamp. For all of its glimmering magnetism and governmental authority, the train can also represent a false luxury.

The idea for the train came to Koons when he saw a plastic and porcelain commemorative Jim Beam decanter in the shape of the locomotive and its carriages in a liquor store window on Fifth Avenue. Struck by a desire to transform the object while maintaining its essence – as a commodity, a collectible, an advertisement – Koons had the suite of cars meticulously cast in stainless steel and sent to Jim Beam to be filled with bourbon, like the original. His version is both a piece of functional memorabilia and a work of art, and yet, if used, its practical function would overturn its existence as an art object. According to Koons, the sanctity of the hidden alcohol sealed within each train car is the “soul” of the piece: “You can drink it and enjoy the bourbon, but you have killed the work of art because you’ve destroyed the soul of the piece when you break the tax-stamp seal.”

Koons issued a full, continuous train, the Jim Beam – J.B. Turner Train, and he also produced the Jim Beam – J.B. Turner Engine and its distinct cars to be acquired and displayed individually. The complete train, on its unified track, promises motion, suggesting a noble, forward charge toward the new. When the cars are separate, they become vessels of potential energy, immobile but aspiring to be coupled together, echoing the consumer’s desire for economic and social mobility.

The Jim Beam – J.B. Turner Train was first shown in 1986 at the International With Monument Gallery, New York, in Koons’s third solo show, Luxury and Degradation. The works exhibited there constituted his eponymous series and included other stainless steel sculptures depicting bar accoutrements, as well as paintings replicating popular liquor advertisements of the time. Alcohol, like the train, can reflect the stratification of upper and lower classes. These liquor advertisements were originally designed to manipulate consumers of different socio-economic classes; the more abstract, monochromatic, and conceptual the ad, the higher the income level of its target audience. Conversely, ads geared towards lower classes tended to be more figurative and narrative, illustrating an alluring world of leisure just beyond reach. Koons recognized the powerful psychological grasp modern advertising exerts upon its audiences, eliciting social ambition and driving a cycle of desire that sometimes results in dependence and debasement, very much like alcoholism. Such degradation is luxury’s necessary counterpart – one cannot exist without the other.

Koons examines the fundamental paradox of luxury and degradation. While he reveals these hidden power structures and asserts that his train, as art, transcends such disparities, he still presents the very strategies he critiques: “A panoramic view of society. I wanted to show how luxury and abstraction are used to debase people and take away their economic and political power. The underlying theme paralleled the alcoholic... I worked in stainless steel. That was the first time I worked with it. It was perfect coordination because stainless steel was the only metal that would keep the alcohol preserved forever. But I also liked the fake luxury of stainless steel. It has always been the luxury of the proletariat. It was to seduce.” (Koons, quoted in A. Haden-Guest, “Interview: Jeff Koons,” pp. 12-36, A. Muthesius (ed.), Jeff Koons, Cologne, 1992, pp. 20-21). 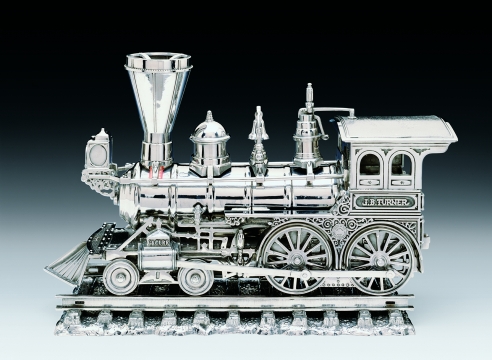