“I am making pottery for art sake, God sake, the future generation, and - by present indications - for my own satisfaction, but when I'm gone......my work will be prized, honored and cherished.” George Ohr in a note to William A. King, art critic for the Illustrated Buffalo Press, c. 1898. [i]

NEW YORK – Craig F. Starr Gallery is pleased to present an exhibition of George E. Ohr (1857–1918) ceramics, on view June 9 through August 14, 2015. George Ohr Pottery: “No Two Alike” comprises approximately 50 works from c. 1890 – 1910. The exhibition includes glazed works and a large selection of the rarely seen unglazed (bisque) pots. Ohr made works in both styles throughout his artistic career, but he abandoned glazing at the turn of the twentieth century and considered the bisque pots his best work because of their raw expression of form, defying the previous misconception that the unglazed pots were unfinished.

Ohr was an anomaly in the world of craft and pottery. His relentless curiosity drove him to make inventive creations that range from art pottery to novelty objects and abstract sculptural pieces. Unlike conventional ceramics, Ohr’s pots illustrate his profound attentiveness to form and materiality; in some pieces the clay is pinched together or crumpled like a paper bag, the delicate walls nearly paper thin; in others it is twisted or ruffled like fabric; still others are elegant, gracefully articulated compositions that recall Beaux-Arts interiors. He heralded the claim, “no two alike,” marveling in his own capacity to mold and manipulate these unrivaled forms.

The son of a blacksmith from Biloxi, Mississippi, Ohr had no higher education and no bourgeois upbringing. He experimented with a few different careers before taking an apprenticeship with New Orleans potter and childhood friend James Meyer. Ohr spent a year traveling through 16 states visiting potters, potteries, and museums to learn as much as he could. He returned home, built his own studio, and became a master of the craft. Abandoning the Arts and Crafts traditions of ornament and function, he created a body of work that concentrated on form. Unappreciated in his own time, Ohr was rejected by the East Coast Arts and Crafts Movement. The art world found his pottery too expressionistic and exotic for the refined, decorative tastes of the era, and ceramic art for Ohr remained a pursuit merely for personal pleasure while he made a living selling utilitarian wares and souvenirs.

The self-proclaimed “Mad Potter of Biloxi,” Ohr assumed a persona that was as eccentric as his unconventional handiwork. Ohr’s studio, crammed with pots, cups, plaques, and other trinkets, became a popular tourist destination on the Mississippi Gulf Coast where visitors could watch the showman throw his whimsical creations from local Mississippi clay. In spite of his minimal recognition as an art potter, Ohr maintained confidence that “when I’m gone my work...will be prized, honored, and cherished.” [ii]

Ohr died in 1918 essentially an unknown entity, only to resurface in 1971 in the realm of modernist art, rather than craft. The fine art community saw an ancestor of Abstract Expressionism in his radical glazes and gestural handling, and the abstract, manipulated forms of his altered pots seemed to anticipate modernist sculpture. His work is highly sought after by collectors and admired by artists. Jasper Johns, a lender to the show, immortalized Ohr’s pots in a number of his own works, including the 1983 painting Ventriloquist (The Museum of Fine Arts, Houston).

George Ohr Pottery: “No Two Alike” is accompanied by a catalogue with an essay by John Yau – poet, fiction writer, and co-founder and contributor of Hyperallergic Weekend. 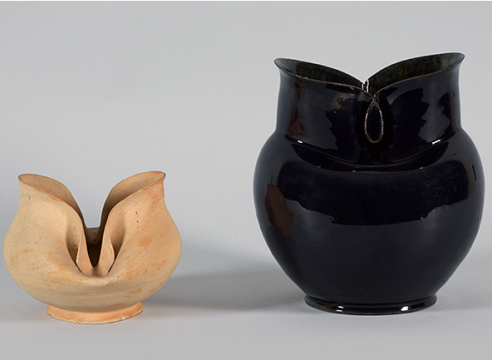 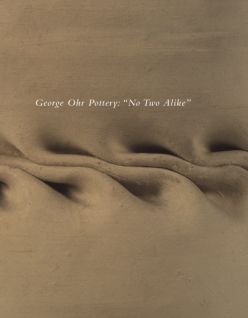 The great ceramist George Ohr (1857-1918) was boastful, combative, deliberately eccentric and hugely ambitious. He called himself the Mad Potter of Biloxi and once told an interviewer, “When I am gone, my work will be praised, honored, and cherished.” He was right about that. But the roughly 50 bowls, cups, vases and pitchers in this stunning exhibitiontestify to a creative sensibility much different from his bumptious public persona. They are marked by an exquisite delicacy of touch, a subtle sense of humor, an extraordinary formal sophistication and a Picasso-like inventiveness.