NEW YORK – Craig F. Starr Gallery is pleased to announce the opening of Chuck Close: Drawings of the 1970s. The show, which runs from October 15 through December 18, 2010, is comprised of over twenty works in various media such as ink, graphite, conté crayon, watercolor, and stamp-pad ink.

The earliest works are from 1973, including Keith/1,280, an early example of Close's use of the airbrush to build an image with dots of varying pigment densities. This technique is further explored in a set of drawings from that year, Bob I-IV, which renders one image in four different scales.

Close continued to make drawings in this style during the next few years, including eight drawings in the show that date from 1974-75. Each of these portraits is formatted identically, with the image occupying a grid that measures approximately 9 x 7 inches on a sheet of paper measuring 30 x 22 inches. By spraying even a small amount of ink into each square of the grid, Close was able to give equal importance to the entire picture. This allowed him to treat the figure and the background with equal importance, something he had not yet achieved in his paintings at this time.

Later in the decade, Close began using many different marks and strokes to equally distribute the information of the image about the working area to create his illusionary portraits. In 1976 he used a series of slash marks to create Drawing for Phil/Rubberstamp, and in 1978 he made Phil/Rubberstamp by applying his fingerprints to a stamp pad and transferring the ink to the paper in varying densities.

Closing out the decade are two works from 1979 that experiment with another medium, conté crayon, which is deployed in varied, almost gestural marks in Arnold/Conté Crayon and Self-Portrait/Conté Crayon.

Chuck Close: Drawings of the 1970s includes loans from the artist and private collections across the country. A fully illustrated catalogue, which contains an interview with Close by long-time friend and fellow artist Joe Zucker, is being published to coincide with the exhibition. 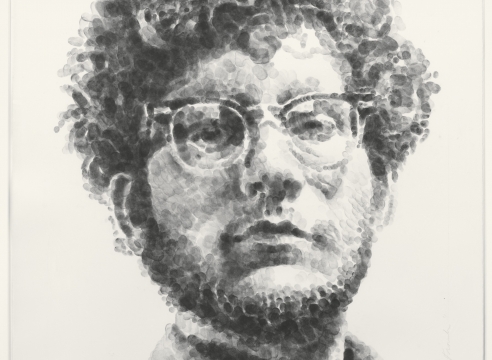 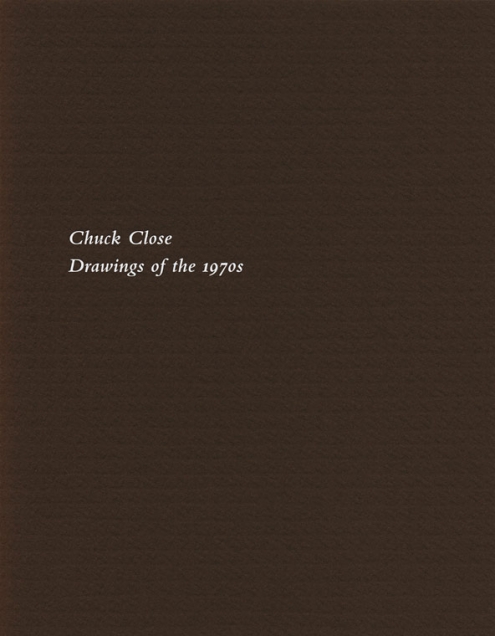