The exhibition is the first New York presentation of Barnett Newman paintings in almost twenty years. On view are six rarely seen paintings—all completed between 1949 and 1960.

Barnett Newman (1905 -1970) began painting in 1945, and with the exception of a brief respite, he continued to do so until his death in 1970. In those twenty five years, he only made approximately 120 paintings, the majority of which are now in museum collections. The earliest works date from 1949, the year following the completion of Onement I, which Newman himself viewed as a breakthrough and the beginning of his fully mature style. In By Twos and Galaxy, Newman’s signature motif, the striking lines, edges, and bands, which he called “zips,” punctuate single-hued canvases. Simultaneously these lines unite and separate the broader areas of color establishing an overwhelming sense of wholeness in his works.

Understanding and highly experienced in the use of paints, brushes and tapes, Newman did not expect these “zips” to be perfect and uniform, instead he anticipated that each would take on its own unique character, like the wavering edges in both Untitled 3, 1949 and Untitled I, 1950. Similar to the other works in the exhibition, the paint consistency in these pieces is varied with some slightly thicker ridges and a varied surface sheen. In 1958, after recovering from a heart attack and a three year hiatus from his work, Newman painted Outcry. Measuring 82 x 6 inches and painted in broad stokes with a palate knife on exposed canvas, Outcry has a striking sense of verticality and scale. In a smaller work on exposed canvas, Treble (1960), Newman again applied tape vertically through the center of the composition, painted over them, and removed them. The three paint passages left on the surface have sharply defined inner edges and irregular outer edges.

Barnett Newman Paintings is comprised of loans from private collections across the country, and is accompanied by a fully illustrated catalogue with an essay by Richard Shiff, Effie Marie Cain Regents Chair in Art at The University of Texas at Austin. It is the first exhibition of Newman paintings in the United States, since the 2002 retrospective at the Philadelphia Museum of Art. 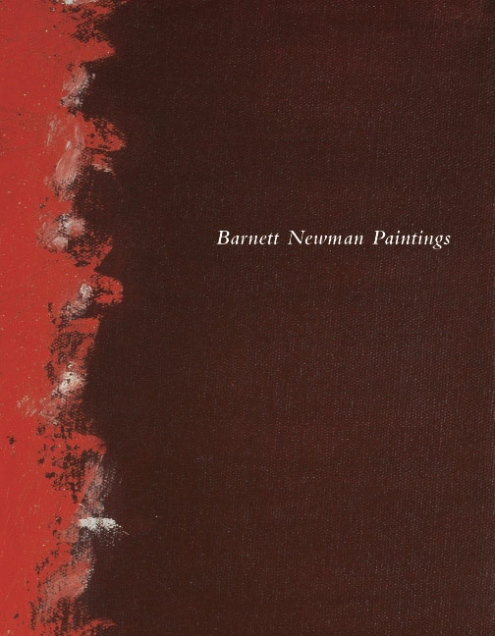 The accolade “gemlike” is undoubtedly bruited about too freely by art critics, but it seems tailor-made for this strange little show, or at least its first room.