NEW YORK – Craig F. Starr Gallery presents the seminal work of Agnes Martin's graphic oeuvre, her On A Clear Day portfolio of 1973. This show commemorates the one year anniversary of the artist's death on December 16, 2005.

During a seven-year hiatus from painting that lasted from 1967-1964, Agnes Martin traveled to Germany to create a set of screenprints entitled On A Clear Day. The result was a portfolio of thirty prints, each with the pared-down geometries in repeated units that together create a balanced whole. These small grids are methodical and meditative and are meant to reflect and evoke nature, as the title indicates. It is a brilliantly restrained allusion; with a simplified vocabulary, touching on themes of time and space.

Agnes Martin (1912 - 2004), whose long career spanned the latter half of the twentieth century, belongs to the generation of Abstract Expressionist painters working in New York in the 1950s and 60s, and she was also an influential figure to the Minimalist artists of the 1960s and 70s. 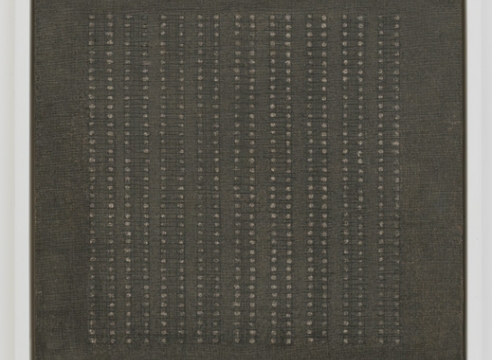